Previous Next
The Happy Couple 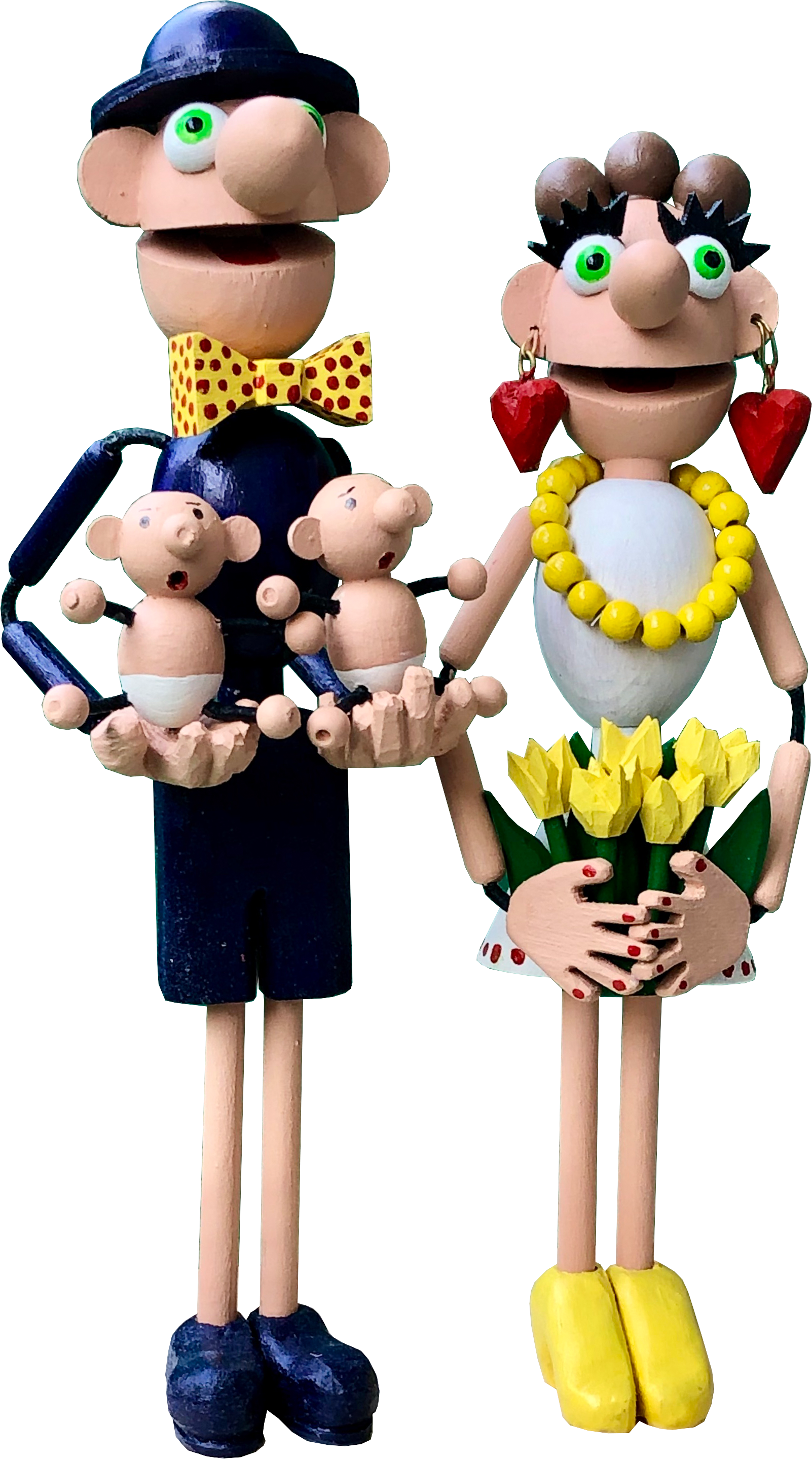 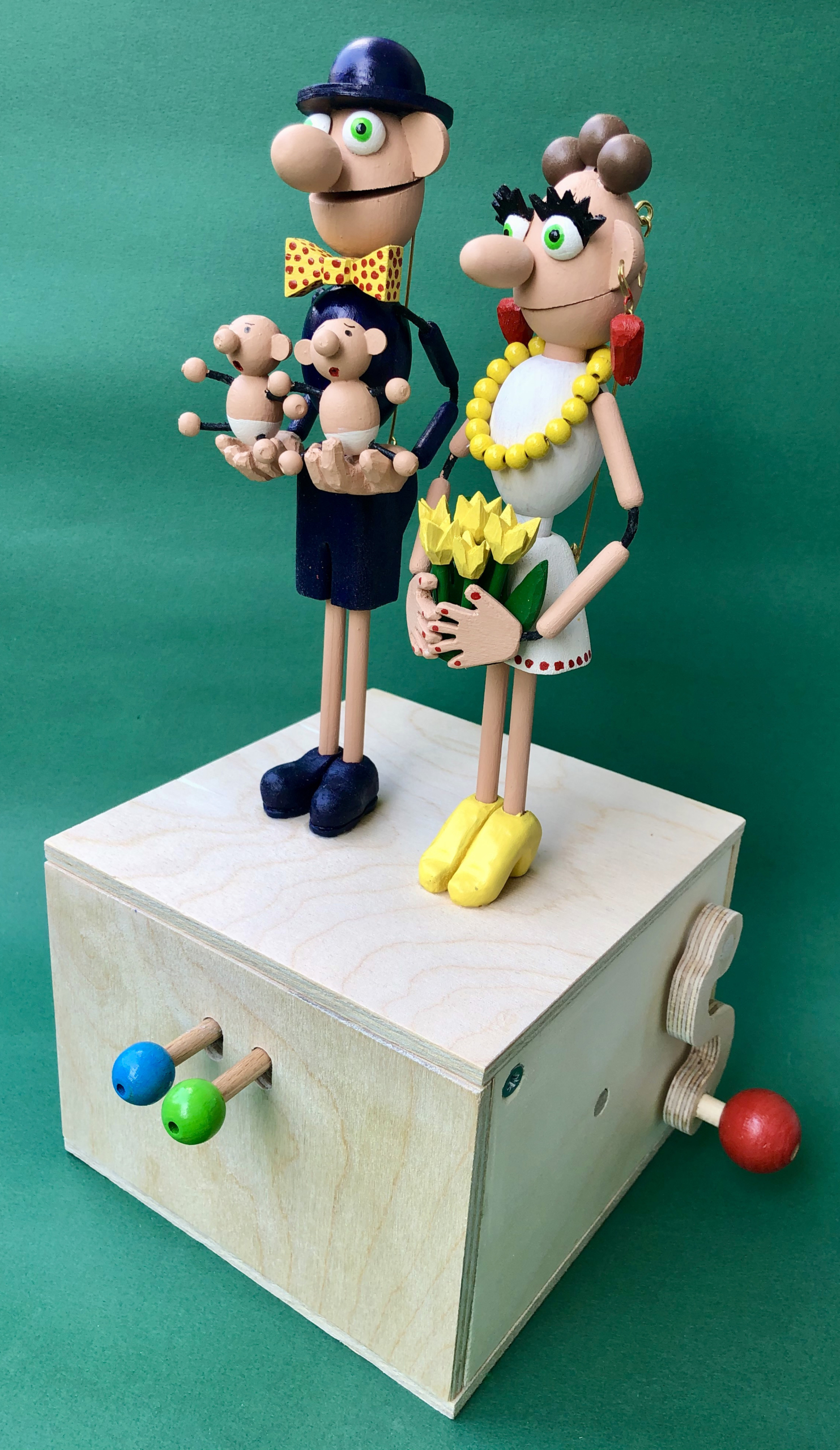 Happiness is infectious, so a happy couple must be doubly infectious, no bad thing to catch whatever else might be going around. The challenge is to move a happy couple into the fourth dimension so that they aren’t just in a happy state, they must also move happily too. I thought back to one of the United Kingdom’s prime ministers, Edward Heath, who was renowned for his heaving shoulders when he laughed, copied by many, not least by a later prime minister Theresa May (see https://www.youtube.com/watch?v=U_wGgPvoysQ).

Our happy couple are also confronted with the eternal question of what to do with your hands whilst on the podium. I decided to have the woman hold a cheerful bunch of flowers, in her personal colour scheme. For the man, another, smaller happy couple seemed just right, even if children have their own ideas about when to be happy or not.

My test engineer, a very smart 4 year old girl is so entranced by talking figures that she likes to not just follow the programme set by the cams, she likes to improvise too, inventing her own narrative about what is happening. This often means grabbing brass rods and yanking them to achieve her desired effect. In this automaton I thought that it might be smart to anticipate that and offer two ways to bring our cameo scene to life. A red handle turned on the side gets the cams moving stubbornly through their preprogrammed sequence and blue and green levers on the front allow free improvisation.

With the blue lever, the man can chatter or laugh endlessly, while his partner waits patiently. With the green lever the woman can return the compliment, while he listens attentively. Of course both can join in the action as and when they wish.

Cranking the red lever turns two cams, one with eight regularly spaced movements, the other with nine. This means that the two figures laugh together, but they are not synchronous, making a pleasantly chaotic impression.

The heads are made from hardwood (beech) eggs which are cut through diagonally at a smiley sort of angle. There are a few tips for a successful cut. (1) It’s tricky to clamp an egg and then cut through it, so it helps if you first drill a hole in the end of the egg and then glue in a dowel. Now you can clamp the dowel, leaving the egg freely accessible for your saw. (2) My drill press produces two sparkly red laser lines which cross to show the position of the centre of the drill bit. If your drill has this feature too, it’s very handy to mark a “straight” line on an egg for cutting. (3) Drill the hole for the jaw hinge before cutting. 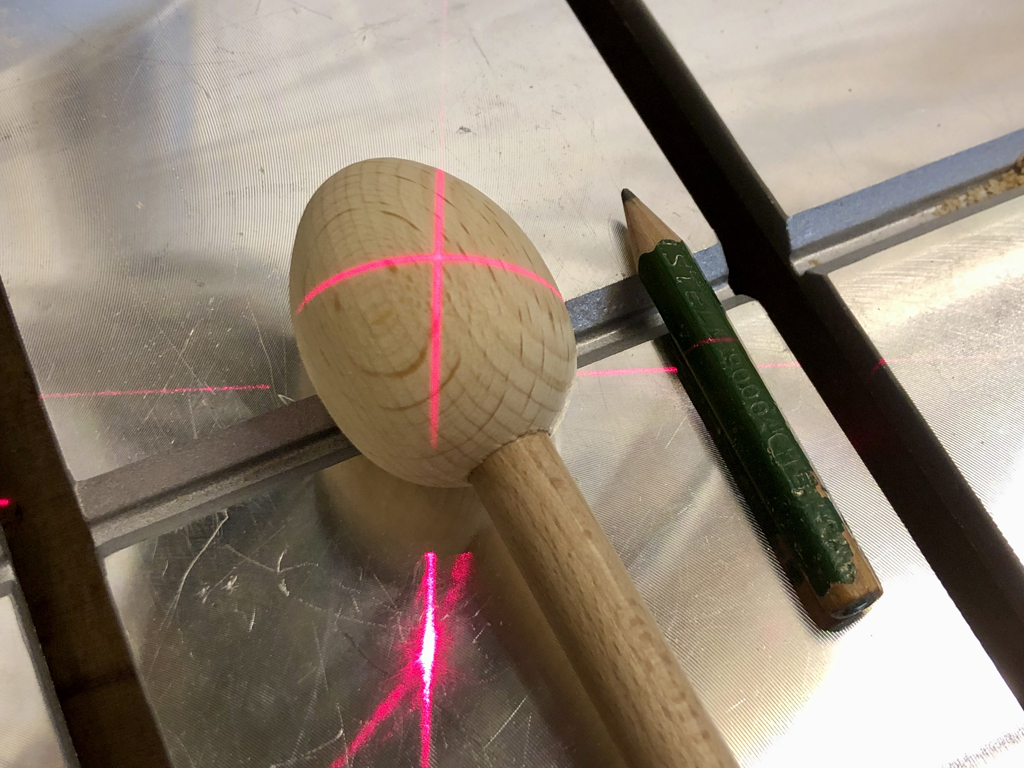 How to mark & cut hardwood eggs

The two figures’ movement is controlled in the same way. In this simplified section through the woman’s lower body you can see that one leg is fixed to the body (and to the base). The other leg moves up and down, which is not obvious to the casual viewer, pushing the waist and the upper body up and then allowing it to fall down. 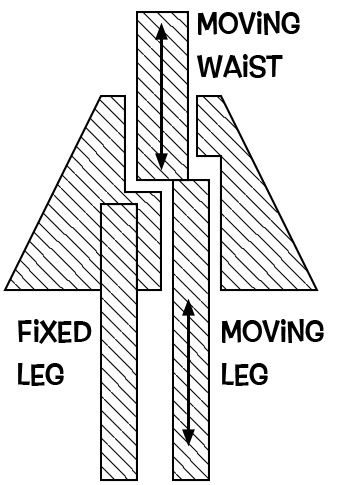 The top of each head is attached by a brass rod to the lower part of the body. When the waist is pushed up this cause the rod to pull the mouth open. I used an old leather shoelace for the shoulder, elbow and wrist joints, allowing them to move quite freely. 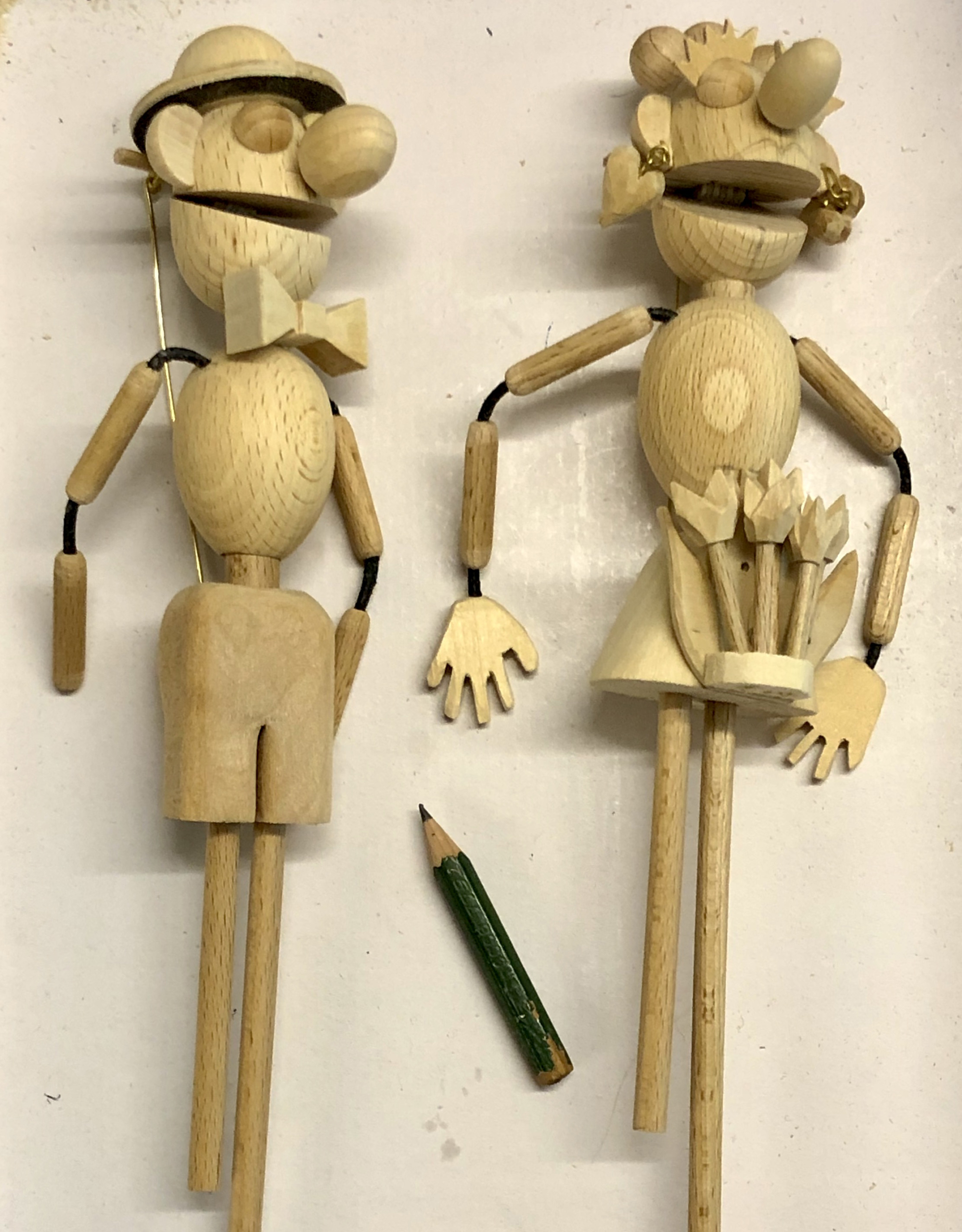 Leather shoelace for the joints 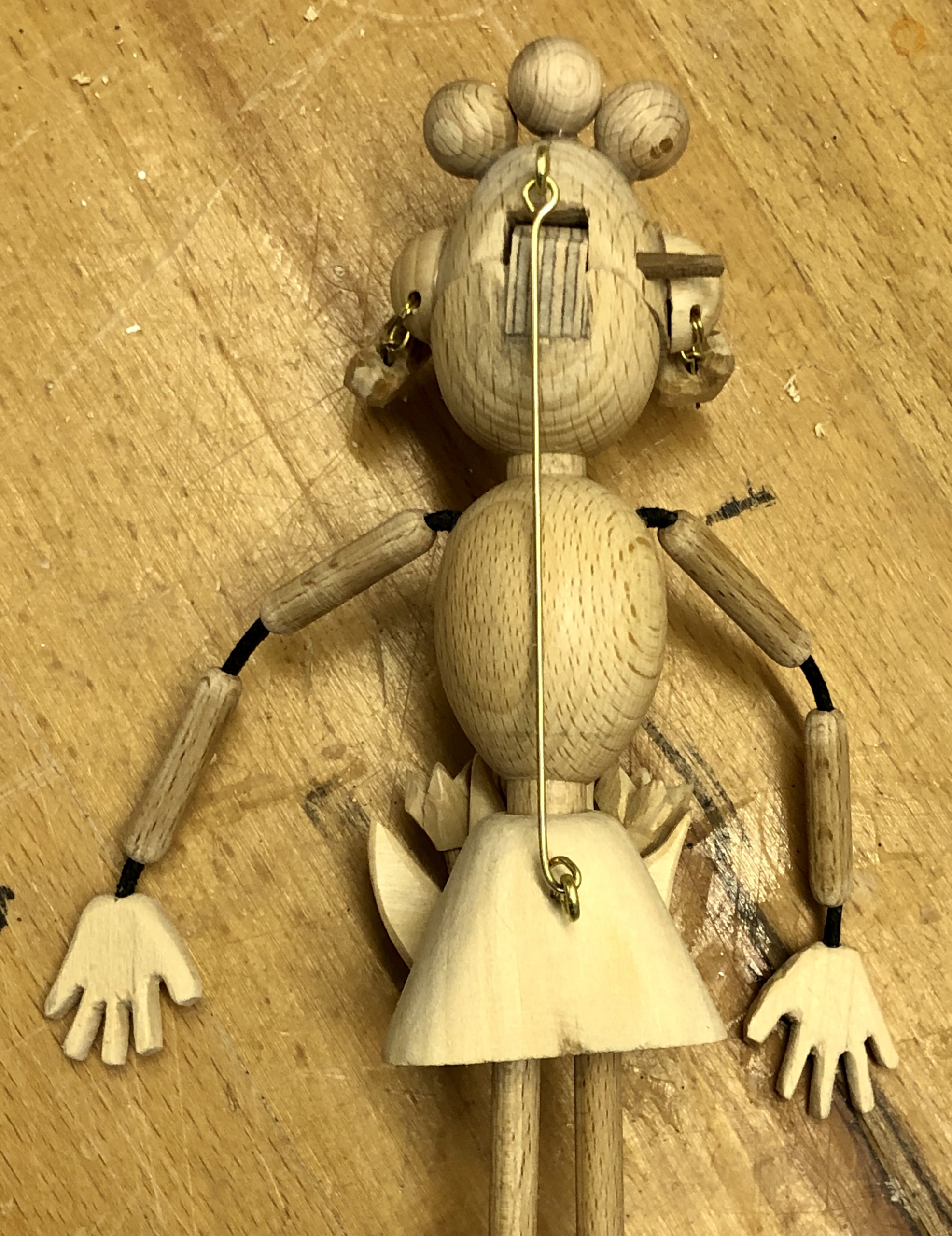 The works inside the box

Turning the red handle rotates a small cog which drives a larger cog. This gearing makes it easy to turn and the outside lever is as long as possible to provide the best “leverage”. The larger cog is attached to the same shaft as the two cams which each drive a simple cam follower. 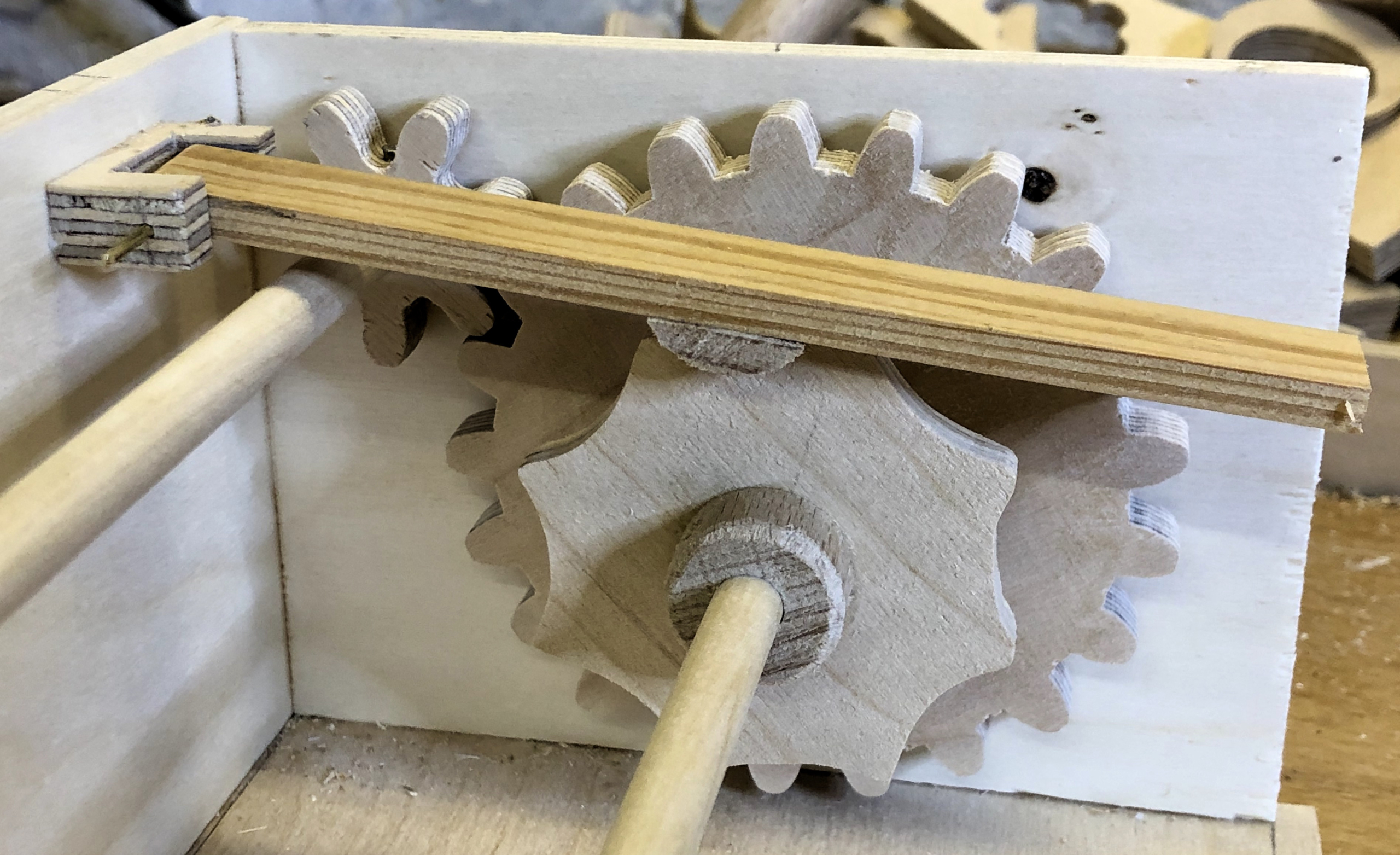 The geared drive for the cam with 8 curves. The other cam has 9 curves.

Pressing the blue or the green lever simply lifts one of the cam followers. At rest, the weight of the inside parts moves the outside knobs up into their inactive positions. 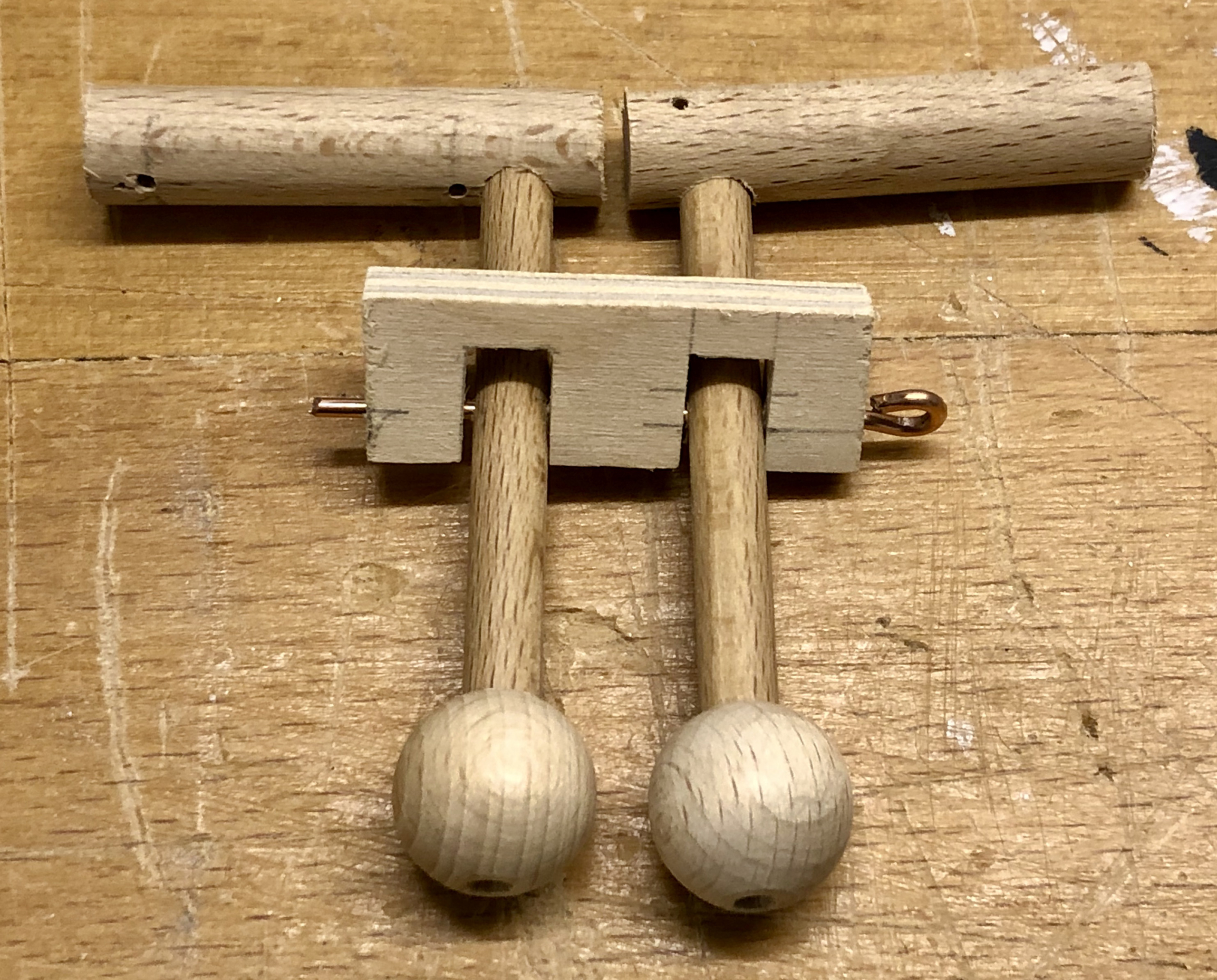 The blue and green levers

With slots cut in the front panel to allow the levers to move, the complete mechanism looks like this. Now you can see that each cam follower can either be lifted by the turning cam OR by pressing the lever at the front of the box (at the right in the picture).

Note that if the cams are lifting the followers, then the blue and green levers will have little if any effect. You can’t lift something that has already been lifted.

I painted the parts for the figures prior to assembly and allowed them to dry properly to ensure that I got the clearances right for easy movement. The babies are very simply made and don’t move, their tiny fists and feet represented by small spheres. 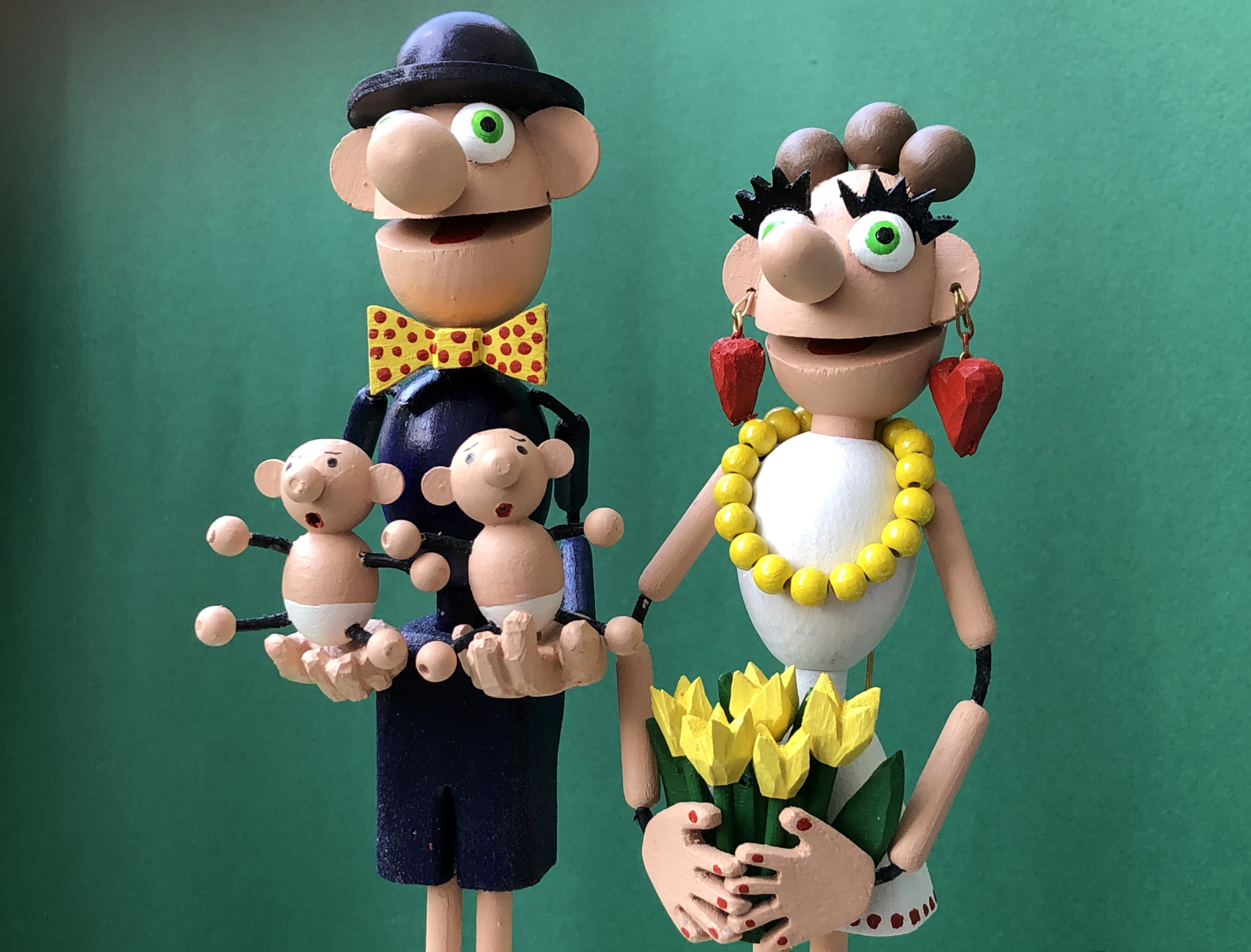